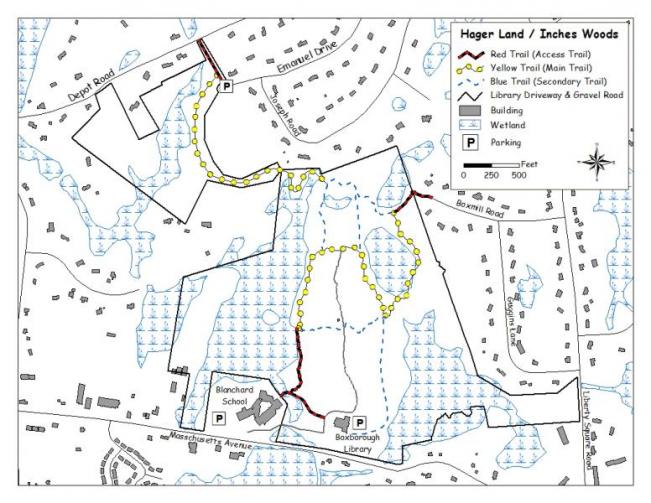 The Hager Land area is located on Route 111 behind Blanchard Memorial School. Parking and trail access are available at the school, the Sargent Memorial Library, and on Boxmill Rd and Emanuel Dr.

Blanchard Memorial School is located on 20.22 acres of this parcel. The Hager land, which houses Sargent Memorial Library, is a 94.43-acre parcel; the Smith, Flagg, and Foster Land is 5.31 acres; and the Guggins Brook Land is 6.11 acres. Large and small glacial boulders are readily visible. The land contains a red maple swamp, Guggins Brook, and a drumlin (a ridge composed of glacial drift) named Hager Hill. White pine and hemlock groves provide cover for lady slippers and other delicate flowers. Trees include hickory, cedar, fir, maple, birch, and oak. The main trail loops around Hager Hill and several trails lead to the top. Trail cameras have captured porcupines, deer, red foxes, eastern coyotes, and a bobcat in these woods. The wetlands behind the school host nesting osprey, wood ducks, and hooded mergansers, among other migratory waterfowl that also pass through.

Inches Woods is a 24 acre parcel of mixed deciduous and coniferous wooded upland and vegetated wetland with a trailhead at the end of Emanuel Rd (with parking), and a trail link to the Hager Land.  Based on Thoreau’s journal records of his walks in Boxborough in November of 1860, this land was a part of the “Inches Woods” described in Journal Nine.

A red trail leads from Depot Rd to the circle in Emanuel Road Extension (a great cut-through for people wanting to access the Joseph/Emanuel neighborhood from Depot). A yellow trail branches from the red, near the Emanuel exit, looping through the forest, past the wetlands with a nice view to the pond area, then into the Hager parcel. The longest loop, including Inches Woods and Hager Hill is about 2.2 miles.

The land became available for purchase in 2009. As the land was under Chapter 61 protection, the town had the right of first refusal. At this point it was under agreement for up to seven houses. With the state of the economy in 2009, the Town transferred their right of refusal to the BCTrust. To pay for the land, the BCTrust had to subdivide the parcel, and four house lots were created. The BCTrust worked with the builder to create a one acre easement at the back of the house lots to create a buffer between the backyards and the conserved land. The new trails were opened at a ribbon cutting on October 14, 2017.

In 1948 the Boxborough Grange donated 20 acres to the town for a school. Blanchard Memorial School was built here in 1949, with two renovations in the 1990s. In 1968 the town purchased the surrounding Hager Land for general municipal purposes. An adjacent parcel was donated to the town by Roy Smith, Peter Flagg, and Craig Foster in 1976. Elio DiBiase gave the Guggins Brook land to the town in 1988 as conservation land. The town opened the Sargent Memorial Library on the Hager Land in 2006. There is a 25-mile view from the library on clear days.

One impressive oak can be found on the northeast side of the property, perhaps a descendant of those described by Thoreau when he visited Boxborough in 1860. In his journal he described Inches Woods as: "just the most remarkable and memorable thing in Boxboro….The handsomest thing I saw in Boxboro was this noble stand of oak wood. I doubt if there is a finer one in Massachusetts.” Where Guggins Brook crosses Liberty Square Rd, one can find ruins of an old mill, used for sawing logs felled in Inches Woods. The Woods was a major source of oak used to build Union ships during the Civil War. Inches Woods was located around what is now Liberty Square Rd, Depot Rd, Middle Rd, and Burroughs Rd.