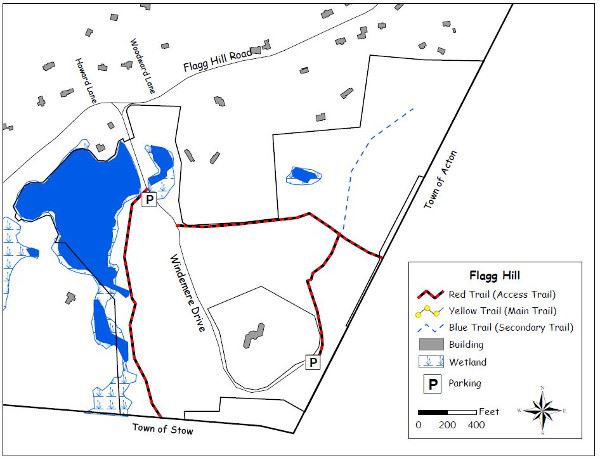 The Flagg Hill Conservation Area connects with over 300 additional acres of conservation land in the town of Stow, making it one of the largest tracts of undeveloped land in the area.

"Flagg Hill Conservation Area is jointly managed by the conservation commissions of Boxborough and Stow. The land was acquired by these communities to serve as critical wildlife habitat and as valuable open space. Visitors who respect the land and its associated natural resources are welcome to enjoy the trails for walking nature study, jogging, cross-country skiing and snowshoeing. Please carry out anything you carry in." This introduction is from a pamphlet and map produced by the Sudbury Valley Trustees and posted at the entrance to the trails. The pamphlet also contains a natural history of the land and a discussion of the habitat areas. Copies of the guide may be obtained from the Sudbury Valley Trustees.

Dog walkers please note: All dogs must be on leash at all times on all Flagg Hill trails, whether in Boxborough or Stow.

There are several trails on this property. However, the only access from Boxborough is from Windermere Drive. Near the pond and the kiosk a red trail connects to the trail network in Stow. After.5 mile the red trail connects to the Erickson Loop Trail (green blaze -0.5 mile) and to the Stow Trail (white blaze -0.8 mile) that leads to West Acton Road in Stow. From the Stow Trail one can also access the Woodhead Trail (yellow blaze -0.5 mile) in Boxborough Road in Stow. A detailed map of the Stow and Boxborough trails is at the kiosk.

This area was used by Native Americans before the arrival of Europeans. The main trail "follows a carriage road of the 18th and early 19th century that extended at least to the town of Groton. Parallel stone walls and an old well site located west of the Stow Trail as well as several cellar holes and stone structures, indicate that people once lived on Flagg Hill." Evidence indicates that in the 20th century, some of the property was used as pasture. In the early 1970s Flagg Hill had a small commercial ski slope. As the area was broken into separate parcels, different land owners used their properties in different ways and the varied habitats today reflect that diverse use.

Citations in this description are from the Sudbury Valley Trustees’ Trail Map and Guide: Flagg Hill Conservation Area, Boxborough and Stow, Massachusetts.